We are sexual creatures by nature; this means we are wired to seek out partners to bond with and mate. Deep within our psyche is a hole that needs to be filled by intimate human interactions. Our minds trick us into filling this void by tying our self-esteem, self-worth, and ego to how well we fill it. The result of all this is that we end up seeking out relationships with people we like and who like us.

But, this task isn’t always as easy as fitting square shapes into square holes. We are very complicated creatures, and at best, what we can get is something manageable – something that sort of fits.

Relationships are not always perfect, and so there are always issues from time to time – relationships experience ups and downs – but when for some reason partners are unable to keep the ducktapes and glue together, breakups happen.

These breakups can be caused by

And when these things happen, they cause people to question their worth (remember, this is how the brain tricks humans), which is often painful. And the mind doesn’t give us a break – it keeps replaying hurtful scenes, picturing different outcomes if things were done differently, and spawns endless questions to justify what had happened. This is a very painful circumstance; with this, the mind urges us to fill that void to escape the torment. If we say “Yes” to this urge “too quickly”, the result is usually a rebound relationship.

What Is A Rebound Relationship 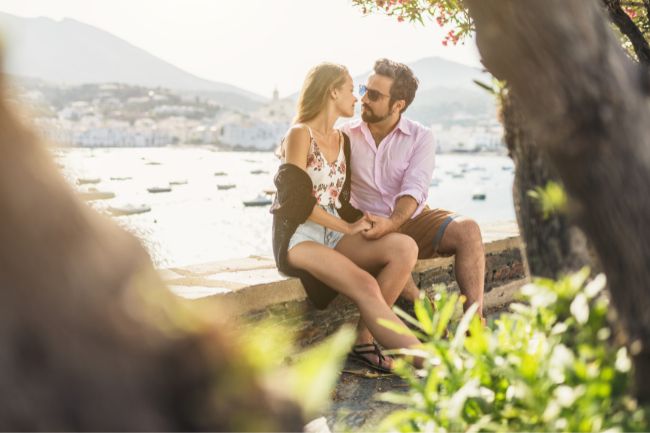 A rebound relationship is usually any relationship one gets into immediately after breaking up to cope with the pain, loneliness, confusion, shame, and fear of being newly single. Though others claim that people can still be rebounding from an ex from years ago by getting into any relationship to get over their long-lost ex.

On one side, are people who are getting into the rebound relationship unconsciously (as their impulses compel them), and on the other side are people who are entering into the rebound relationships consciously (because they want to salve their urges). In both cases, the result is that the new partner is seldom chosen for their perfectness (they are not necessarily the square box for the square hole) but are more or less shoulders to cry on (though they actually won’t be crying on the shoulders, but rather “dating” them).

Others claim that it is all about the “intensity” of the relationship that just ended (for instance, a person might need about a year and a half to recover from a divorce).

In comparison, others claim that it is all about the “nature” of the relationships (i.e. healing from a toxic relationship can happen within days or weeks since the person involved had been in misery all along and might actually be relieved and happy it all came to an end). But in all, ending a relationship hurts – even if it lasted for only two weeks with a toxic partner.

In summary, a rebound relationship helps a hurting person to deal with or ignore all the negative emotions (such as anger, guilt, shame, sadness, betrayal, and so on…) that come with breaking up. Other times it is just done in order to get back at an ex; nothing more.
Hence, rebound relationships usually follow a predictable path – a four-stage life-cycle that determines the fate of both parties involved.

Also read: Here’s How to Break Up with Partner (Via Text Message)

This is usually the most rewarding stage. The person concerned is now enjoying compliments, kisses, and lots of sex. They feel validated and wanted. All their ex didn’t appreciate in them is being appreciated by this new partner. In fact, they are so happy with the new relationship that they may even decide to show it off – to flex on their ex. But because it is usually transient, what comes next is the confusion stage

What happens at this stage is that the relationship starts feeling rather strange. Everything may still be as they were, but it wouldn’t feel as exciting as it felt a few weeks or months ago. Some odd behaviors and things begin to catch their attention. And they begin to wonder why they feel unhappy about the new relationship. Why?

At this point, all the excitement and buzz have completely died down. Reality is beginning to set in, and they are beginning to realize that compliments, dates, and sex may not be sufficient for a lasting or meaningful relationship. They begin to realize that they do not share similar interests, values, and goals with this new partner. In fact, they realize that they do not even “love” this new partner as much as they thought initially. So they proceed to make a decision.

Depending on their level of maturity, and commitment to the success of the relationship, amongst other compatibility factors, people at this stage may decide to fix the things that are not right to make it work, or simply dissolve the relationship. For most people, and in most cases, the latter is usually the case.

So, is this a good thing? Are rebound relationships good or bad?

Are Rebound Relationships Good Or Bad?

For example:
– It can help people with high attachment anxiety to get over their ex without going crazy, or doing something extreme (like killing themselves or their ex)
– It can boost their ego and self-esteem and make them feel important, valuable, and enthusiastic about life once more.
– It can prevent them from going back to a toxic partner, and
– Help them heal and recover faster (from the heartbreak, shame, guilt, anger, fear, etc.), thanks to the support and companionship of the new partner
– On the other hand, if the rebound relationship ends badly, or was “bad” all along, then
– It triggers a negative feedback loop. Since they have just experienced two soul-crushing heartbreaks within a short interval, it may make them begin to believe that maybe love is not for them or that there is something fundamentally wrong with the other gender.
– This would further deplete their ego and lower their self-esteem – since they have fallen twice.
– And, the whole rebound relationship thing can badly hurt an innocent new partner. They may be judged harshly during the relationship and have unreasonable standards demanded from them. Sometimes, they may have to endure listening to the other yammer on and on about their ex for weeks or months on end. In the end, they may feel used, betrayed, and crushed.
That said, both parties must understand what is going on. Suppose one person is not yet ready for anything serious, but simply enjoys the company and support of the other. In that case, they should inform the other party so they can proceed with caution – by providing support, and maybe even enjoying it while it lasts without getting overly attached.
But even at that, ending a rebound relationship can be painful; so below are some little clues you can pick up to tell if a (rebound) relationship is failing

Signs A Rebound Relationship Is Failing (or Would Fail)

Most of the signs are quite overt, whilst others are subtle or hidden; below are some of them

– They Talk About Their Ex (A Lot): This clearly indicates that their ex still owns and occupies a large chunk of their mental space. At first, it is okay if they talk about their ex to process their emotions, but if it persists for too long, it is a red flag

– They Think Their Ex is Either The Devil or An Angel: This sharp contrast is hardly logical. It means they are still deeply hurt by the breakup and may not be emotionally stable enough to build a healthy and meaningful relationship in the meantime.

– They Have Their Ex Belongings: Properties of the ex (clothes, shoes, pictures, etc.) lying or hanging around is a clear indication that they haven’t let go of the former relationship/partner.

– They Are Still In Contact With Their Ex: If they still call, text, chat, or meet up with their ex (to “check-up” on them), then the chances of the new relationship working out is very, very slim.

– They Compare You With/To Their Ex: If they desire their new partner to be like their ex, or totally different from their ex, it means that they either (consciously or unconsciously) want their ex back, or are trying to distract themselves with the new partner.

– They Are Moving Too Fast: If they are “aggressively” pushing for the relationship to be more than what it is (without allowing it to grow and blossom), it may be a sign that they are scared the new relationship would amount to nothing and hurt them again. In that sense, it is not really about the new person or the new relationship but rather about getting a sense of stability and safety.

– They Are Reluctant With Commitment: If they are petrified, avoidant, or uncertain about moving things forward (even at a slow pace), it means they are not yet done processing the pain of the previous relationship.

– They Want An Inordinate Amount of Attention And Sex: They hardly make out time to talk and connect intimately except for sex, sex, and more sex, all day, every day. And the more it happens, the more the relationship feels shallow – because it is only a coping mechanism…nothing more

– They Are Too Showy With The Relationship: If they are particularly interested in getting their ex jealous about their new relationship and partner, it may be a sign that they truly desire vengeance, not romance.

– They Pick Completely Opposite Personalities: If their ex is too dissimilar to the new partner, it may be subtle yet a powerful indication that the relationship is doomed to fail. Why? It is because the new partner is most likely not their taste.

Summary [What To Do]

The biggest downside of a rebound relationship is that it is most times used as a way of avoiding doing the dirty work – of processing emotions, healing, letting go, moving on, or getting a Therapist to help.
And when people don’t deal with their baggage, they drag it into new relationships and cause more harm to themselves and others.

Don’t be in a hurry to date someone. First deal with your issues (or allow them to deal with theirs), and when everyone is home and dry, dating can continue.

We must understand that the whole anxiety and urge to date is a trick our “Monkey Brain” plays on us, and if we can transcend it, life will be much more fulfilling and happy.

15 Red Flag Signs That You Are In A Toxic Relationship
Next Post: How Do You Know It’s Love At First Sight? [And What You Must Do]